4 Things I Hate About Back-to-School

Back-to-school season is in full swing. Even though it’s great having my kids out of the house from oh-dark-hundred until 3:00 p.m., there is a price to pay. The school actually expects me to do some stuff. Nuts to that, I say. Here are four things I don’t give a rat’s patootie about when it comes to starting a new school year (yet, I’m still expected to pretend like I care).

I dread partaking in the crazy scavenger hunt, better known among parents as shopping for back-to-school supplies. And unfortunately, the older my kids get the harder it is to find some of that junk. Gone are the Pink Pearl erasers and Elmer’s Glue. Replaced by impossible-to-find items like bassoon reeds and HP 2-point-GEEK blahety-blah-blah-blah calculators that can do scientific notation up to seven digits past the decimal point (because, you know, six places past is just not accurate enough).

I sometimes picture teachers and administrators just sitting around the faculty lounge, puffing on their “high-falutent” cigarellos and eating Toblerone chocolates, while trying to come up with the stupidest back-to-school supplies they can think of.

Principal: Hey, guys, I got one. How about a book sock?
Math teacher: What the heck is that?
Principal: Beats me. I overheard two scrapbookers talking about them in the obsessive-compulsive aisle at Michaels. But let’s put it on the back-to-school list and tell the parents they have to get the one at Staples or we’ll hold their kid back two grades.
Shop teacher: And let’s say it has to be purple.
French teacher: With French titles.
Photography Teacher: Wait, I don’t see the Kodachrome film I requested for my photography class? Did it get bumped?
Principal: They don’t make Kodachrome film anymore.
Photography teacher (sinisterly): Exactly.

(Evil laughter all around through a thick fog of smoke.)

Teachers please stop sending me your threatening, back-to-school nondisclosures for me to sign. You know, the ones that say things like “I don’t want to hear a pterodactyl ate your child’s homework, even if it’s true. Your child will FAIL my class if he/she doesn’t do the homework.” So fail the kid already and keep me out of it.

I know you come up with this pseudo-legalese so those parents of entitled kids can’t say they didn’t know better when little Damien gets an ‘F’ in calligraphy because he never showed up or did the work. However, you really are dumber than a stump if you believe that a silly, nonbinding contract is going to deter any parent who shamelessly defends their kid for setting the chemistry lab on fire.

“Your Honor, no one specifically said my son couldn’t blow up the lab in the name of science.”

Last January, at the start of the second semester, I got so fed up I wrote my own little contract called The Dymalski Family Disclosure and asked all my kids’ teachers to sign it. Some teachers did, and wouldn’t you know it, those were the teachers we got along best with last year.

Over the years all my friends with daughters have told me how lucky I am to have boys when it comes to shopping for back-to-school clothes. True that. My sons will wear anything from a Hefty Bag to old underwear that we’ve already used to wax the car. They really don’t care.

In fact, Quinn would be just as happy to wear the same shirt and pants 24/7. Especially if it meant he didn’t have to interrupt his routine with pajamas. He considers it a huge bonus if he can get away with not changing his clothes for many days in a row. Consequently, we’ve had to burn several items of his clothing, but hey, it saves on laundry detergent.

However, the downside of new back-to-school clothes for my boys is:

My sons are each well over 6’ and built like lacrosse sticks. In fact, Derrick has an inseam of 39” (according to the guy who fit him for his Varsity Jazz Band tux) and his waist size is 27”. Try going to Walmart and asking for 27” x 39” Levis. Ironically, Walmart stocks the reverse, in which case I can cram both my kids into one pair of pants and send them to school as conjoined twins. 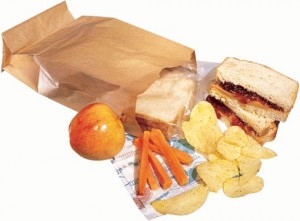 You can count on one hand the number of times my kids have had school lunch since kindergarten. I have been making their lunches since time began. The problem is by third grade they swore off school lunch forever. Which is probably why I now have to scour the Internet looking for 27” x 39” jeans for them.

I admit I’m a bit of a food Nazi. I don’t eat red meat, dairy, gluten, or processed sugar. Yeah, yeah, I know it’s crazy, but I hardly ever get sick and neither do my kids. However, that DOES mean I have to keep sack lunch stuff on hand. This is more difficult than it sounds since my kids will snack on anything from a jar of peanut butter to a bouquet of parsley. Seems like every time I go to make a sack lunch we’re out of something. For once I wish a jumbo bag of chips from Costco would last longer than a single episode of Family Guy.

Now if I can just find a free public school that provides all required school supplies, employs teachers that never contact me, lets my kids wear the same raggedy, unwashed outfit everyday, and has a cafeteria catered by Whole Foods, then I’d be golden.

Geez, is that too much to ask?