In honor of my youngest turning 16 in one week, I give you this funny carpool excerpt from my book, Confessions of a Band Geek Mom. Fare-thee-well, carpool. I will miss you like I miss a toothache. 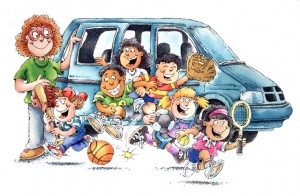 I’m a little worried about my family’s carbon footprint. I think it’s a men’s size 14 and growing. For three people who live in a town so small you could literally walk across it in less than an hour, we drive way too much. Ironically, we’re not motoring around just so we can go to the store and back. No, we get into our cars and leave our fair city at least twice a week to go to (are you ready for this) band practice.

Yes, my sons joined a state honor band, which at the time seemed like a good idea, until we realized that the band director lives about 50 miles from us. Hmm…call me psychic, but I’m guessing this guy is going to want the kids to travel to his end of the GPS map for practice. (It would be too much to hope it’d be the other way around.) When I suggested to my older son that he literally phone in his performance, he just looked at me as if I had the common sense of a fence post (being he’s a teenager, I’m getting used to that look).

So here we are at one of those parenting crossroads where you ask yourself, “Just how far should I go (in our case, literally) for my kids?” Before you have children you almost always answer that question with “as far as it takes.” But once you have them you realize there’s a fine line between support and indulgence, and you’re never exactly sure where that line falls, or if you should even attempt to cross it.

For us, we decided to support our sons’ decision to be in the state honor band, however we knew we couldn’t do it alone. I’m a firm believer in the concept of “misery loves company,” so we talked other young, talented, local musicians into joining the state honor band and then lo and behold we had ourselves a carpool. Yes, I admit my encouragement of these kids was partly for selfish reasons, but hey, it’s not like I was pushing them to join a cult or something. … Okay, so maybe it is a little like joining a cult, but at least the uniforms are way more fun (if you don’t count how much they cost).

Luckily one of the moms in our carpool was proactive about organizing a driving schedule. Kudos to her, because had it been up to me we’d still be slugging through Mapquest just trying to figure out where the heck the rehearsal space was, which at the time changed weekly due to commercial space issues. Turns out a 25-person big band makes A LOT of noise. And after just one rehearsal in each new spot the neighboring tenants would say, “Uh, yeah, I don’t think so. Buh-bye.” (I’m happy to say the band has since found a permanent home.)

So Proactive Mom e-mailed out a calendar and asked all the parents to sign up for the times they’d like to drive. When no one responded, she went ahead and scheduled the families. Well, of course this got great response and it went something like this:

Parent 1: “Oh dear, I’m afraid we can’t drive on the 12th because Derrick has an orthodontist appointment. Can we trade with Sully on the 5th?”

Parent 2: “That’s fine, as long as Sully can drop out of next month’s schedule. He has soccer play-offs until the 27th.”

Parent 1: “Okay, so for our first trip I can drive, IF the kids take a bus to the dog park and wait for me to pick them up in the parking lot.”

Parent 3: “Will the bus driver let them on with their instruments?”

Parent 4: “What if I drive the instruments down earlier in the day, then someone else can bring the kids later. I can take everything except John’s upright bass.”

Parent 3: “I’ll bring that. I have to make an airport run anyway.”

Parent 1: “Then why don’t you just take all the instruments down and back in the first place?”

Parent 3: “Because I’m picking up out-of-town friends, and between the extra bodies and all the ski equipment they bring I won’t have room for anything else.”

Parent 1: “Oh shoot, you know what? I just realized that even though I can take the kids, I can’t stick around to bring them home.”

Parent 4: “I’m driving their instruments to practice, except for John’s bass.”

Parent 2: “I’m picking the kids up after practice.”

Parent 1: “So we have four parents in one carpool, and we’re all driving to the same place on the same day?”

We all look at each other in confused silence.

I think we just increased our carbon footprint to size 15 DDD.