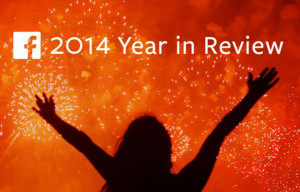 If you’re on Facebook, I’m sure you’ve noticed that Facebook has generously summed up the last 12 months of your life into a collection of photos and captions. This creeped me out on a couple of levels. One, my Facebook year in review is a reminder that everything I post on Facebook goes on record forever. (Although I have to admit this is only a minor annoyance, since I’m old enough to have entered the Facebook era with a colorful past that I’d previously carved out the old fashion way—by actually getting caught firsthand doing the things that corrupted my reputation.) And two, it became blatantly apparent in just the few seconds it took to read my year in review that I had not even come close to accomplishing my goals for 2014. Probably because I was too busy posting bullshit on Facebook.

The Facebook year in review reminds me of those annual newsletters you occasionally receive with your friends’ Christmas cards…if it was your Downton Abbey man-servant that wrote the first draft for you. Outwardly Facebook gives the impression that it carefully handpicked meaningful events from your life, when in reality it just slapped together the most popular crap so it could get on with polishing the silver. I assume Facebook chooses what to feature based on the posts that received the most LIKEs and comments. In the case of my own Facebook year in review, Facebook chose events that are indeed noteworthy, however they’re not all necessarily things I want to remember or share in a highlight reel.

But since Facebook is “faceless” and has no ego, it graciously allows you to customize your Facebook year in review. That way you can take out the embarrassing (or painful) parts that went viral and replace them with the happier occasions from your wall that no one paid any attention to. But then again, if no one cared that I made brownies back in March using gluten-free sawdust, they’re probably not going to give a rat’s ass now.

Like everyone else my participation in Facebook goes in spurts, depending on how much I have going on in my life at the time. Ironically, the busier I am doing interesting things that are post-worthy, the less I post. At those brief, idyllic moments when life is going my way, I just don’t have time to tell everyone how cold my feet are or take a test that identifies which Brat Pack character I am from the 1985 film, The Breakfast Club. It’s when I’m bored waiting around in airports or staring at a blank screen suffering from writer’s block that I tend to get online and post things that sound ridiculous or whiney when taken out of context six months later.

Apparently I’m not alone when it comes to the times at which I choose to purge my thoughts onto my Facebook wall. Because in reading several of my friends’ Facebook year in review posts, the following event trends emerged, proving once again that no matter how unique we think we are, we are all very much the same at heart.

It’s amazing how much transportation figures into our lives. We don’t talk about when we take public transportation, yet several of us posted that we put new tires on our various vehicles this year. If you were one of these poor souls, I suspect at the time you were wasting away in some sterile waiting room, and thus had nothing better to do than post your immense ennui on Facebook. And since the rest of us could painfully relate, we all jumped on those posts sharing our own version of Dante’s Sixth Circle of Hell, which I do believe is defined as being trapped in a Subaru dealership’s “customer courtesy room” with a TV streaming Fox News turned up to a volume level of 10. Just shoot me now.

I remember when I got divorced a couple of years back I wished I could’ve sent out announcements the way you do when you get married, thus avoiding all the (not-so) discrete pity-stares across the produce aisle at the supermarket (as if I didn’t know I was divorced). Well, it turns out I could’ve (and should’ve) made my announcement on Facebook. Several of my newly-single-lady friends had posted divorce party events with after-event pictures that rival the bachelorette party scene in Bridesmaids. Who knew?

It seems that we turn to Facebook for support when anyone we’re close to dies, but no one got the eulogy shout-out more than our canine companions. Which makes sense, since a dog truly loves you unconditionally, even if you’re a complete asshole. The abrupt disappearance of that kind of devotion is heart-wrenching, and thus results in an endless comment thread of condolences. But I do find it odd that we rarely talk about our dogs until they die. However, it seems that we can’t post enough about…

There are more memes, videos, pictures, and Vines about cats online than anything else, and a lot of that nonsense showed up in our Facebook year in review posts. Our poor dogs have to wait until they’re dead to receive some Facebook love, yet when your neighbor’s stupid cat has a stare-down with a lizard or blocks a Great Dane from coming up the stairs, we set it to a soundtrack by AWOLNation, and think it’s as post-worthy as Neil Armstrong walking on the moon.

Why wait for Halloween to dress up like a Middle Earth Melkor or a scantily-dressed Romulan when there are now umpteen different Comic-Con events year around across the country to accommodate our weirdest fantasies. And judging from Facebook’s assessment of our annual activities we flocked to these events like Leviathan lemmings. Even though I personally haven’t attended the official Comic-Con International in San Diego since in I was knee-high to Reaper, I feel like I haven’t missed a year since 2009, when I joined Facebook. A fair amount of the Facebook year in review posts that ended up on my wall included a Comic-Con tribute. As you can see, I roll with a very distinguished crowd.

See You Next Year!

Every Facebook year in review post ended with this sign-off. And yes, you will see me next year, because as much as I hate to admit it, I’m hooked on Facebook. I love reconnecting with my childhood friends, and keeping in touch with the relatives who’ll still speak to me, even though they’re all thousands of miles away.

As for my Facebook year in review, you won’t see it because I chose not to post it. That’s because it was just a bunch of tire-purchasing, divorce-party, dog-funeral, cat-dancing, Klingon fashion show posts, and lord knows I have reputation to maintain. 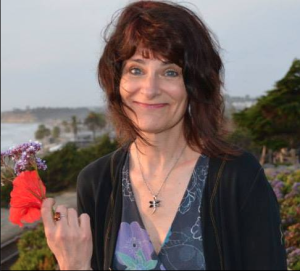 Stacy Dymalski is an award-winning keynote speaker and stand-up comic who gave up the glamorous life of coach travel, smokey comedy clubs, and heckling drunks for the glamorous life of raising kids (who happen to be bigger hecklers than the drunks). This blog is her new stage. For more of Stacy’s comedy check out her book Confessions of a Band Geek Mom available in bookstores and on Amazon in paperback and Kindle.

Also check out her new book, “THE MEMOIR MIDWIFE: Nine Steps to Self-Publishing Your Book”, which is available in select bookstores and on Amazon in both paperback and Kindle.