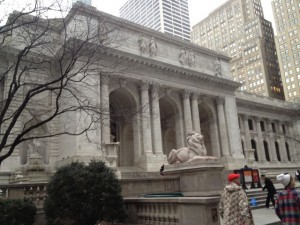 As I write this I’m in the New York Public Library on 5th Avenue using their famous reading room as an inspiration to pen my infamous blog. I’m in town because my 12th grade son, Derrick, is here to do a college audition for the Jazz Studies program at The New School in Manhattan, but unfortunately I still have to work…or at least pretend to.

But before I get started it suddenly dawned on me that I hadn’t procrastinated long enough on the walk over to the New York Public Library from the hotel, even though Lord & Taylor and the flagship H & M were on the way. So after “people-watching” folks in the library until it got weird, and then staring at a blank Word doc for at least another 20 minutes I decided it was time to peruse a few magazines for inspiration.

Since I already subscribe to periodicals like The New York Times, Rolling Stone, and Vanity Fair, it’s only natural that I gravitate toward equally mind-nourishing publications. After all, there’s so much out there to read, and typically so little time to consume it all, that I want to be smartly selective when I have the rare opportunity to do so. No sense wasting my time on drivel that doesn’t allow me to grow as a person.

So of course, I pick up the latest copy of Cosmo.

To me, reading Cosmo in a library is like eating mini-wiener wraps at a cocktail party. In either case I wouldn’t normally do it if it weren’t for the circumstances, so it doesn’t count. And besides, I just happened to open the magazine to an article entitled “How to Spice Up Married Life Sex.”

Being newly divorced, married-life sex (or any sex, for that matter) is not exactly pending on my agenda. However, it wasn’t that long ago that I was faced with what I will kindly call boudoir ennui. Hmm. I wonder if had I read this “life-changing” (per the article’s subtitle) exchange of ideas back then could I have saved my marriage?

Tie a String Around My Finger

First off, the Cosmo article says you need to schedule weekly sex with your spouse so that you don’t forget to do it.

Right there you lost me.

The article goes on to say that I should wear something sexy, yet comfortable.

I do believe that’s an oxymoron.

Because last I checked the frayed Cal Berkeley sweat pants that I acquired in college, paired with my boxy “Change Your Altitude” Sundance T-shirt don’t exactly define what Victoria’s Secret models are wearing these days. But damned if they aren’t as comfy to lounge around in as a pair of holey sweat socks. (By the way, I have those, too.)

Truth be told, I do have a couple of lacy little sheer teddies that have been wadded up in my underwear drawer for about five years. They were sexy at one time, but now are so wrinkled that I’ll have to iron or steam them before they’re ever recognizable as undergarments. Which means they’ll never see the light of day again.

And finally, Cosmo says give your weekly bedroom shenanigans cute code names, so you and your spouse can talk about them in public without everyone else knowing what you mean. It’s kind of like having your own sexy language with your spouse.

Oh great, so now I have to learn “Jivenese” (or whatever) to maintain a sex life?

It’s not enough that I can’t remember the name of that…um…thingee that…you know…grates cheese into fine shreds. What’s that thing called? (A cheese grater.) Yes, thank you! A cheese grater! Now I have to recall the term for…oh, what was it? Remember that thing you did on the 24th with your tongue? No? Sure you do. It’s um…oh dang, it’s on the tip of my tongue. What did we decide to call that? For some reason all I can think of is “cheese grater.”

As I continued to read the Cosmo article I realized that it would not have saved my marriage.

On the contrary, it reminded me of a routine done by the New Zealand-based comedy duo Bret McKenzie and Jemaine Clement, better know as Flight of the Conchords. They have a hysterical song called Business Time, in which they describe the joys of marital sex, very much like the Cosmo article, except they mean to be funny.

Now if you’ll excuse me, I need to get back to work and write a blog for this week. Geez, you’d think being in a place as majestic and inspiring as the New York Public Library I’d be able figure out something to write about.