At least once a week I’m solicited to write an endorsement in my blog about random people’s products or causes. These promotional requests range from hawking books, to fundraisers, to Kickstarter or IndieGoGo projects, to CD and/or movie releases, to products, to marriage proposals. Yes, once some guy actually wanted me to put his marriage proposal on my blog. I was thrilled that he assumed that his fiancé read my blog, but nevertheless I felt it was a little to “Honeymoon in Vegas” even for me to be involved with. Besides, what if she declined in a comment? I didn’t want my blog to suddenly become the platform for anyone else’s neurotic, family dysfunction other than my own. 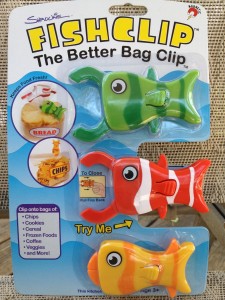 But then I received an e-mail from a company called Skrockie about this cute little product called a FishClip™. Essentially, it’s a chip clip that looks like a fish. Based on the fact that it’s absolutely adorable (and that it was created by an inventor with a background in toys, which I thought was cool) I told the Shrockie people that if they sent me some FishClips that I’d try them out, and if I liked them, I’d write about them.

So they did. My kids and I have been using them for the last month or so, and I have to say we love them. Not only do they make you smile just by looking at them, but they’re also so functional that they make traditional chip clips, clothespins, and twist ties seem positively medieval.

Why? Because the jaws of those little FishClips work like a ratchet to grab and squeeze whatever you’re clamping shut so you know it’s as airtight as can be. Obviously they’re great to seal bags of chips, bread, coffee, cereal, grains, beans, etc., but I wanted to find an even more out-of-the-box use for them, so I searched the Internet to see how other people were putting them into service.

FishClips Get Jiggy at a Concert

Turns out people are more creative than I thought. FishClips have been known to do everything from wrangle cords to adorn the rims of Martini glasses at parties (as shown in the the video on the FishClips website). But the one thing that I didn’t find ANYWHERE was something that we use clothespins for all the time. And that’s to pin sheet music to a stand when performing outside on a windy day. Sounds weird, I know, but being that my two sons are in multiple jazz bands, they perform often at outdoor events and I can’t tell you how many times their music has been carried off (sometimes never to be seen again) by a sudden gust of wind. Clothespins help, but they’re not always strong enough. After a while it gets expensive replacing all that sheet music.

So we tried clamping the music to a stand with FishClips and lo and behold we have a winner! Mainly because you can tighten the jaws of the FishClip around the music and stand so well that it would take a frickin’ tornado to pull them apart.

Needless to say, I will now be carrying FishClips in my purse to every outdoor concert at which my kids perform. The cost of FishClips is much cheaper than replacing sheet music that ends up entangled in a tree somewhere.

So there you have it. My very first personal product endorsement. And just so you know, Shrockie didn’t pay me anything to write this and I wouldn’t have done it if I didn’t like the product. In fact, I’m ordering several packages of FishClips now from Amazon as stocking stuffers, so if any of my relatives are reading this, act surprised on Christmas morning.