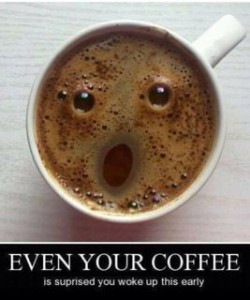 Every Tuesday morning I get up at what feels like the middle of the night and go to a 7:00 a.m. Toastmasters meeting. I know what you’re thinking. How can anyone be coherent enough at that hour to do anything other than choke down an overpriced cup of coffee christened with a pretentious Italian name?

Let me tell you, it takes some getting used to.

But the thing that helps me transition from sloth to smooth talker (and attentive listener) at “What-the-hell-am-I-doing-up”? o’clock in the morning is the people in this particular club and what they have to say. For example, this past Tuesday my good friend, John Fry, gave an insightful speech on happiness. Which given my present state of mind (for reasons which I will share later when I can mine the humor out of it—and you know I will) was consoling to me.

So What’s New and Hip About Happiness?

Among other things I learned that the mad dash for happiness is so in style right now it has actually been elevated to academic status, and as such one can presently major in happiness at some colleges. This is good news for sociology majors. Now they’ll move one step up from the very bottom of the list of the world’s most useless degrees. Actually the happiness degree itself is called Positive Psychology. Regardless, it’s only a matter of time before we’re subjected to a whole new generation of arcane cocktail party monkey chatter like “Hey there. My name is Chandler, and I have a BS in Happiness.” Yes, Chandler, I’m sure you’re just full of BS happiness.

Happiness by the Numbers

As John continued with his speech, he presented a pie chart that states 50% of one’s happiness is genetic. Meaning if you had sad sack parents, then half the time you’re going to be down in the dumps yourself. Conveniently this is just one more thing you can blame your parents for, as if allergies and your inability to ride a unicycle were not enough.

After that, 10% of your happiness is due to your situation. So, for example, if you live in a cardboard box on Sunset Blvd., panhandling to earn a living, you’ll be unhappy only 10% of the time. Most likely when it rains, which fortunately in Southern California is only about 10% of the year. I’m not sure how the math breaks down if you’re homeless and you live somewhere with inclement weather. In that case I suggest you shop around for a new pie chart.

That leaves 40% of the happiness pie unclaimed. But according to John’s research that rather large slice of one’s happiness is controllable by making choices that align with whatever makes you happy.

I concur this is true UNLESS you have teenagers.

Or rather teenagers out in the world making choices that seem about as foreign to you as a water buffalo spouting haiku in Javanese. In which case you just stand there dazed and confused going, “WTF?” You spend a lifetime teaching your kids to be free thinkers, only to discover that one day they actually grow up to be free thinkers. This was fine when I fully expected them to freely think the way I do. But when they don’t it’s conflicting because on the one hand you’re proud they’re brave enough to go against the tide. On the other hand you want to strangle them for not being more cognizant of the undertow.

So this 40% happiness pie thing is a totally elegant model until you realize your happiness depends upon the people who matter to you most, and how you want them to be happy. But what do you do if what makes them happy makes you unhappy? Intellectually I know that means you let go. Which, by the way, does not make me happy.

Catching Hemingway on a Good Day

One of my favorite quotes is by Ernest Hemingway, who said, “Happiness in intelligent people is the rarest thing I know.” This is comforting because it confirms that even though I don’t walk around spouting sparkly platitudes of optimism, I’m probably not an idiot. On the other hand, that doesn’t mean I’m innately unhappy, either. For the most part I can “…always look on the bright siiiide of life,” even when I’m nailed to a cross going how the hell did I get here? The fact that Papa Hemingway left the door open a crack by saying being both happy and intelligent is rare, but not impossible, in and of itself makes me happy. But then again he did commit suicide at age 62, so that’s kind of a buzz-kill right there.

In the end, John’s speech did lead me to one interesting (and to some extent comforting) self-discovery. Every generation has some form of pop psychology to describe how we should all deal with what we perceive to be the atrocities of life. Remember EST? Dear Abby? The Inner Child? Primal screaming? Stuart Smalley on SNL? So now I guess we’re using pastries as metaphors to define our varying degrees of happiness. And if that’s the case, then I would have to say I’m definitely staring down into the flaky crust of a somewhat obtuse rhubarb pie. Sweet and sour indeed.
http://www.youtube.com/watch?v=WlBiLNN1NhQ