Recording History in a Garage Sale 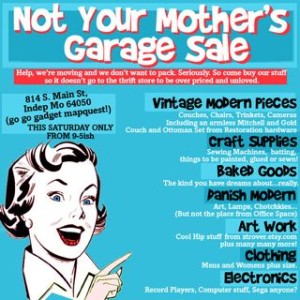 Well, it’s been a while since I’ve posted a blog and I have a very good reason for that. Actually I have several reasons, the biggest being that I can’t clone myself. Between doing all my self-publishing workshops (which have become so popular I’ve now expanded them into Southern California), and working at the Park City Information Channel (I’m the Director of Program Development), and helping launch Sassypants Design (a funny greeting card business in Del Mar, CA, with my talented graphic designer friend, Amy Chin), I haven’t found time to uncross my eyes from the dizziness of it all. Let along get a coherent thought down on paper that’s even mildly entertaining.

But in addition to all that I’ve decided it’s time to move after 19 years of living in the same house.

I’m totally psyched about the idea of moving, except for the fact that I’ve spent a large percentage of my life firmly planted in this house like a potted ficus. As a result, I have more useless junk than artifacts in the Museum of American History in Washington, D.C. The difference being their crap is all catalogued. Mine’s obscurely strewn in non sequitur piles. So every time I go to look for something, let’s say the paperwork for the last time I refinanced my house, it’s like playing the “2008 Stacy’s Tax Return Edition of Where’s Waldo.”

But more importantly it begs the question, how the heck did I acquire so much stuff? Until I was about 30 I could fit everything I owned into a 1982 Mazda RX-7. Back then moving took less that a single afternoon, the bulk of which was spent stopping off at The Pannikin in Encinitas, for a quick java jolt, and to see if I could convince any of the local surf rats to help me unload my few precious items into my new abode.

Garage Sale to the Rescue

So to purge my life of the unnecessary articles of clutter I’ve accumulated over the years, like a shrink-wrap machine and a five-piece drum kit, I’m having a garage sale tomorrow. Because according to the laws of space and time I have several items that will not fit into a 1,000 square-foot condo, given all the OTHER crap I intend to take with me.

For example, take my record album collection (please!). I started buying albums when I was 12 years old, long before the invention of MP3s, or even CDs. The first two albums I ever bought were Carole King’s Tapestry and The Beatles’ Sergeant Pepper’s Lonely Hearts Club Band. And I played them not on a stereo, but on my mother’s hi-fi record player (which, by the way, I wish I still had).

In short order albums became my addiction, so much so that today I own over 1,000 record albums, all of which I bought brand new before CDs took over the market. Sorting through my pile of vinyl reminds me how eclectic my taste in music was and still is. I have everything ranging from Cat Stevens’ Tea for the Tillerman, to Weather Report’s Heavy Weather, to the original Tommy by The Who (NOT the soundtrack to the cheesy Ken Russell movie).

Given my pension (in my pre-parenting days) for traveling light, it’s amazing to me that I’ve carted those albums all over the country with each move I’ve made. For a long stretch I didn’t even own a turntable (I do now, thanks to eBay), however I hung on to those record albums as my lifeline to a simpler time, during which each album tags a unique memory that seems like something I saw in movie.

For example, Heart’s Dreamboat Annie album reminds me of my sister and me standing in front of the big mirror in our childhood dining room, mouthing the words to Crazy on You into paper towel tubes, as we pretended to be Ann and Nancy Wilson. And when I picked up Earth, Wind & Fire’s All n’ All album, I was reminded how Serpentine Fire instantly transformed me from a metal head chick into a disco queen. And then there’s Al Stewart’s Year of the Cat, which makes me fondly recall the innocent magic of falling in love for the first time and a teenage girl’s naiveté in believing, “This is forever.”

Should it Stay or Should it Go?

As I sorted through my albums, trying to decide which ones to sell and which one to keep, I couldn’t help but think this isn’t just a record collection. It’s a meta tag for my childhood and young adult memories; a timeline of my life, punctuated with the occasional Jeff Beck guitar solo or Steve Perry high note. (And yes, I fantasized that he was singing Faithfully exclusively to me.)

In the end, the only thing I accomplished by going through my albums is that I alphabetized them. And then I carefully put them back into the old orange crates in which they’ve been sitting since I had my apartment on the corner of Telegraph Ave and Durant during my days as an undergrad at U.C. Berkeley.