A Restless Encounter in a Public Restroom

Last week I was washing my hands in a public restroom in City Creek (a shopping mall in SLC) when I heard the toilet flush in one of the stalls, and out came a toddler girl, followed by…a man. I must have looked incredulous, because the guy immediately started running at the mouth like a broken faucet.

“I’m so sorry, but I didn’t feel comfortable sending her in alone,” he babbled. “I waited until no one else was in here, but you must’ve come in after us.”

“I go on the big potty now,” the little girl proudly announced. And even though she didn’t seem stressed or upset to be with this man, I didn’t want to later read about how some guy had abducted a little girl at City Creek and they were last seen together near the women’s restroom at the food court.

“Where’s your mom?” I asked the little girl.

“In Provo,” she offered.

I casually planted myself in front of the exit, with a defiant posture that indicated he didn’t stand a chance against a mother’s instinct to protect a child (any child) against harm…especially the kind inflicted by someone bigger and stronger who knows better.

He instantly got the message.

“No, no, see we’re divorced, and this is my daughter and it’s my week, and well, she had to use the bathroom, and…”

“Why didn’t you take her with you into the men’s room?” I interrupted.

He screwed up his face like I’d just forced him to suck a lemon. “That’s disgusting. I don’t want my little girl around a bunch of half naked men. Plus, the urinal explanation alone would kill me.”

Well, he had me there. And the fact he was even concerned about this bode well for him.

“Daddy, don’t we have to wash our hands?” asked the little girl, completely oblivious to the standoff taking place.

No Rest for the Neurotic in a Restroom

Suddenly I flashed back to a time at the Park City Library when my now-grown son Derrick was five years old. He was making a case as to why he was too old to use the women’s room with me.

“I want to go in the boys’ bathroom by myself,” he said defiantly. 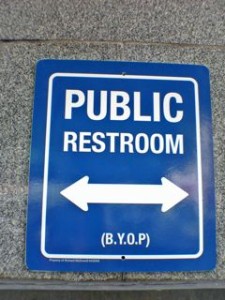 I protested, but he held his ground…and his “pee-pee,” which meant I’d better back down NOW because I didn’t bring any spare Thomas the Tank Engine undies.

I opened the men’s room door a crack and asked if anyone was in there. When no response came, I told Derrick to go in and that I’d be standing right outside if he needed me. He proudly entered while I prayed he wouldn’t touch anything that wasn’t attached to his body.

About 15 seconds later a man came down the hall and entered the men’s room. My heart stopped. What should I do? The guy didn’t look like a pedophile. Or did he? What the hell does a pedophile look like? Could I pick him out of a line-up? Crap, I don’t even remember what he looked like. What color was his hair? What was he wearing? I started to sweat profusely like I was going into shock.

And then my heart stopped because I heard the worst possible sound that could’ve assaulted my ears at that moment. “Mom! Help! Hurry, please, help me!”

I burst into that men’s room like I was shot out of a cannon. The man was standing at the urinal with his pants open, doing his business.

“Excuse me!” the guy protested indignantly.

“Yeah, no problem.” I replied dismissively without even looking at him, as I ran toward the stall from which my son’s voice was coming. Fortunately, Derrick had not locked the stall door, and when I flung it open I saw that he was perched on one side of the toilet seat, hanging on for dear life trying not to fall in.

I breathed a sigh of relief when I realized why he was calling for help. I quickly pulled him off the commode and cleaned him up. When we emerged from the stall, Mr. Grumpy Pants was poised to give me a verbal smack-down.

“Lady, you do realize this is a MEN’s room,” he yelled WAY too aggressively. “That means when men enter it they expect a certain level of privacy!”

Oh man, this dude had no idea what he was up against.

“Okay, first of all you’re lucky I didn’t come here swinging a crowbar with the assumption you were molesting my son. Second, unless your jewels are literally made of semi-precious stones, you haven’t got anything I haven’t seen before. And although I appreciate that you’re obviously not an exhibitionist, you are a hazard to your own health if you think you can stand between ANY MOM and her kid calling for help.”

I’m sure I had that cock-eyed, maniacal, I–will-break-you-in-half-with-my-bare-hands look. And I think I actually spit when I spoke. Wisely, he backed down and simply said, “I’m reporting you to the librarian,” and then stormed out.

Derrick looked at me concerned. “Mom, are we in trouble?”

I confidently smiled at him. “Nope. Don’t even worry about it.”

I looked at the little girl in the City Creek bathroom and suddenly realized how much she resembled her dad. “Yes,” I said to her. “You definitely should wash your hands.” I stepped away from the exit and looked at her father. He smiled and ushered his daughter to the sink where he supervised a good handwashing.

It’s weird. Even when your kids go from being little dependent creatures that think you’re the super-est of superheroes to big, hairy, smelly teenagers that only want to hang out with you when you’re paying, that instinct to protect wakes up when needed like a dormant fire-breathing dragon. Public restrooms were never scary places to me until I had kids. And now they will forever feel creepy. I can’t help it. Maybe deep down I really am just a crazy person at heart.

As the man and his daughter left, he turned to me and quietly said, “Thank you.”

I smiled to myself as I watched them leave. “You’re welcome,” I whispered back to an empty restroom.

Well, if I am crazy, at least I know I’m not alone.

Public Restrooms and Other Parenting Problems by Defining Motherhood