Living in Park City, you can’t avoid the Sundance Film Festival when it comes around every year the second half of January. For 10 straight days Park City, UT, balloons from a sleepy little town of 7,500 permanent residents to 50,000+ imported “beautiful people” all vying for the same parking spot. Usually while I’m trying to get to the grocery store just to buy milk.

I’ve been to every Sundance Film Festival since 1988, so people are always asking me to give my perspective on it. Part Hollywood glam and part circus freak show, the Sundance Film Festival is like if Mardi Gras and the Academy Awards hooked up after a drunken pub crawl and spawned an illegitimate love child. That would be Sundance.

The dichotomy between suburban ski bum parents and Hollywood heavyweights is an entertainment genre all unto itself. Personally, I have been asked for directions by Steve Buscemi, “shushed” in a movie theatre by Kyra Sedgwick, and asked to coffee by Jason Ritter (John’s son). I’ve also showed Sally Field to her seat, shared a table in a restaurant with the 60s recording artist Donovan, and I accidentally almost ran over film critic Roger Ebert with my car (in my defense, he was jaywalking).

And that’s just the A-list behavior I can talk about. Believe me, I’ve been to many a Sundance Film Festival party where a major star’s over indulgence of alcohol results in a “Technicolor yawn” that he or she does NOT want gracing the pages of Entertainment Weekly.

On the flipside of the camera, I’ve interviewed countless Sundance Film Festival directors and producers for KPCW radio, many of who went on to win Academy Awards. But ironically no one wants to hear the dirt on them, since no one knows or cares who they are. (Even though movies couldn’t be made without them.) I once saw a major film producer trying to pay with a check at the Park City Rite Aid. However, the little Vietnamese cashier wouldn’t let him do it since he didn’t possess two forms of ID. Fair enough. But I do know for certain that this guy is worth bazillions…according to the Forbes Top 100 Richest and Most Influential People in Hollywood. He ended up leaving without his Gatorade, Power Bar, and Marlboros.

Parkites Get Their Sundance On 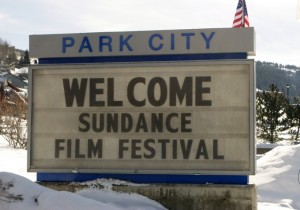 It’s also interesting to note that most Parkites are not enamored with these annual Tinsel Town tourists, even though we are well aware of who they are (‘cuz deep down we really do love movies). And the Sundance Film Festival likes that just fine because that means the festival folks get a lot of free local help in exchange for free movie tickets.

For example, I have one friend (a mom with kids the same age as mine) who Sundance taps every year to volunteer at the Eccles Theatre because she won’t take crap from stars, stars’ agents, publicists, producers, posers, or Harvey Weinstein. This makes her a huge festival commodity because the Sundance bigwigs know she won’t fawn over the stars, cater to their illegal dependencies, or worse yet, try to slip them a script she wrote after she quit working to stay home with the kids.

Regardless if you volunteer at the Sundance Film Festival or partake in movie screenings, when you live in Park City and you try to do the Sundance thing, it can be hard to balance family and festival. My kids will tell you that more than once they’ve missed dinner due to an overextended post screening Q & A. And they get tired of frozen pizza or El Chubasco Mexican take-out when they have to eat both at least six times in one week, since that’s about all I have time for during Sundance.

The worst was when my kids were in preschool. They went to a private school that shares a building with Sundance’s Library theatre venue. In the old days I’d pull into the Library lot and it was all I could to convince the parking lot gorilla that I hadn’t rented this toddler as a ruse to get in to see Sex, Lies, and Video Tape without a hard ticket.

“Look at me!” pointing out to the attendant that I’m still in my pajamas. “And look what I’ve got in the back,” indicating a snowsuit-adorned three-year buckled into a car seat. “Now get the hell out of my way before I blow my coffee-laced morning breath into your Botox-laden, derma-abraised face, thus causing you to pass out into a halitosis-induced coma!”

He’d just step aside, because during Sundance it’s easier to do that than deal with a crazy woman in fuzzy slippers.