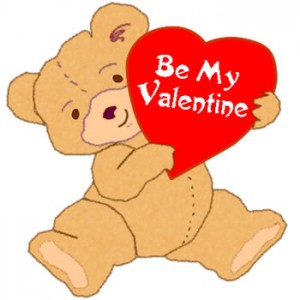 If you go into any grocery store or mall right now you can’t escape the saccharinely sappy parade of Valentine’s Day teddy bears holding hearts, heart shaped boxes of chocolates, anemic bouquets of cellophane-wrapped roses, and cutesy cards adorned with sparkly dust (which, by the way, shed more than Tinkerbell battling a bad case of psoriasis).

And don’t even get me started on Victoria’s Secret and all that uncomfortable string nonsense that poses as underwear.

Such is the stuff that marketing gurus (i.e. men) have determined women want for Valentine's Day. All of which is supposed to lead to a raucous tumble between the sheets on February 14th, right after the little lady is done cleaning the kitchen and putting the kids to bed.

Oh, be still my heart.

We all know that Valentine’s Day is simply a token holiday created by Hallmark to sell more cards and get guys laid. But if couples insist on taking the bait then why not make Valentine’s Day something truly special? Men, you really want to impress your ladies on Valentine’s Day, thus leading to the second reason this obtuse holiday even exists? Then you’re going to have to drop kick those traditional Valentine’s Day myths right into oncoming traffic and take it up a notch.

Valentine’s Day Myth #1: “All she wants is chocolate”

I’m sorry, but in most cases a box of waxy cheap chocolates does not set a woman’s heart aflutter. Don’t get me wrong, we women love chocolate, but there are some things to consider. For example, if your lady is trying to lose weight or cut back on sugar DON’T get her chocolate, because guess what? She’ll eat it. And then feel guilty about it afterward, and it will be ALL YOUR FAULT! Which does not lead to sex, unless you plan on having it with yourself.

However, if she really does want chocolate then go for the gold. As in a gold box of Godiva chocolates, or any other high end brand that she wouldn’t buy for herself. Even if it’s just a few precious pieces, that’s way cooler than picking up a box of stale, no-name confections at the grocery store on your way home from work. Just because it comes in a heart-shaped box doesn’t mean you put your heart into it when you bought it. (Yeah, that’s right. We’re on to you, Skippy.)

In my case, I DO love flowers, which is why I occasionally buy them at the grocery store. That’s exactly why I don’t do cheetah flips if a man gets me flowers from the grocery store. It’s like bringing me a quart of milk. Gee, thanks.

If you’re going to get a woman flowers, put some muscle into it. Actually order flowers from the florist, in the form of a nice arrangement that says “Hey, I thought of this days ago, which is why you’re receiving these flowers by carrier while I’m at work.” Yes, I have to say that’s impressive.

But be sure your lady actually likes flowers before you give them to her. I had a friend who was allergic to anything with a stem and petals, however, her husband got her flowers every Valentine’s Day for 10 years. He finally stopped in the 11th year…because she divorced him.

Valentine’s Day Myth #3: “I buy her lingerie because she likes it”

Oh, get real. Men buy women lingerie because men like it. There is nothing comfortable about underwear that is so stringy you could floss your teeth with it. After 40 a woman’s body changes such that a pair of thong panties is likely to disappear between a woman’s butt cheeks and it could be weeks before anyone notices it’s missing.

Unless your woman has requested a specific piece of clothing, do yourself a favor and just get her a big, fat gift certificate to Nordstrom (or her favorite store). Then let her plan a girl’s day out with her besties.

That’s like saying “As long as I don’t look the gorilla in the eye it won’t rip my head off.” Trust me, if the gorilla gets mad enough it WILL snap you like a twig regardless of where you target your gaze.

Not that anyone has ever asked us, but tell me why would a woman (who probably works and takes care of a family) get all hot and bothered over receiving a gift that doesn’t even remotely lighten her load? You want to get a working mom excited? Come home early and make dinner, dude. And that includes shopping for the ingredients ahead of time and cleaning up the crime-scene mess you made in the kitchen while concocting your culinary creation.

Or better yet, take her out to a really nice restaurant. And while you’re at it make sure YOU arrange for the babysitter and make the dinner reservation. And give her enough notice so she can actually get cleaned up for the occasion. None of this “Surprise!” crap where you say you’re taking her to Sizzler but then do an end run to Chez Big Bucks. Nothing pisses off a woman more than being tricked into showing up to a five-star restaurant wearing a $6 Target T-shirt and a stunning pair of mom jeans.

‘Nuff said. Guys, you have your work cut out for you. Now get out there and impress your ladies. It’s the 21st century, for cryin’ out loud. This is NOT your father’s Valentine’s Day.

What Married Women Really Want For Valentine’s Day by Robert B. Barr and Jill W. Bley of The Huffington Post