When Did I Go From a Target to Nordstrom Swimsuit?

With swimsuit weather coming, I figured it was time to buy a new swimsuit. Being that I live in the mountains I don’t get a chance to wear a swimsuit that often. Yes, I do have a hot tub in my backyard, however, it’s buried under four feet of snow six months out of the year. So when I finally get up the courage (around February) to dig it out and take a dip I’m usually wearing my fleece thong accented by a mismatched Gortex bra. (Picture Victoria’s Secret Antarctica style.) 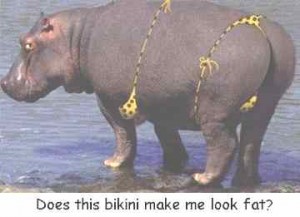 The last time I bought a swimsuit was back in 2008 when we visited my parents in Tortola, B.V.I. As I may have previously mentioned they own a hotel there, so when the kids were little we used to visit them every summer. But now that the kids are busy teenagers, my boys would rather stick pins in their eyes than hang out with their geezer mom on a beach while she sips frothy drinks until she thinks she can sing all the parts from A Chorus Line simultaneously (don’t ask). As a result, we haven’t been back in a while.

But when we did go, I do remember that in the Tropics people wear swimsuits to everything from weddings to divorce depositions (presumably so the plaintiff can show the defendant just what they’ll be missing) so it’s rather pedestrian to have limited swimwear. Which is why I had several cute swimsuits back in the day. And just last week I got one out and tried it on.

Holy mother of Cheez Whiz on a cracker what a horror show THAT was.

Swimsuit Reality is a Bitch

When I looked in the mirror wearing these ridiculous little swaths of fabric, my body was not exactly how I remembered it. Let’s just say back then each thigh thought she was an orphan, but now they’ve grown to the point where they’re inseparable BFFs. The good news is my boobs are a little bigger, but when I lie on my back, they slide down into my armpits and disappear completely, leaving the swimsuit top to wilt faster than two tangerines that have been baking in the sun all day. Which is easy to ignore because the bigger problem is that my ass spreads out like an oil slick. I can just hear the seams in my swimsuit bottom pop to the tune of “June is Busting Out All Over.” (And by the way, swimsuit, my name is Stacy.)

Obviously, it was time to get a new swimsuit.

So I did what I always have done when I bought a swimsuit, I went to Target. Usually, I’d pick three or four swimsuits off the rack, try them, on and then buy the one I liked best for about $29.99.

They MUST be Making Swimsuits Smaller

But something has happened to Target swimsuits since 2008 because now they all look like they can’t fit anything bigger than an American Girl doll.

When I mentioned this to a girlfriend who was also of a certain age, she told me that I needed to shop for a swimsuit at Nordstrom. “They can fit anyone,” she said a little too enthusiastically, as she sized me up like a prize hog at the fair.

In the “Activewear” department at Nordstrom I did find several swimsuit tops and bottoms that I liked, but they were all separates. And when you added up the combined cost of both, the total was roughly the same as the down payment my parents made on my first car (which was a ’74 VW Bug, by the way).

And Then I Heard Angels Sing

But when I tried on the pricy swimsuits, I could see how they justified their cost. To sum it up, they had more structural engineering that the Golden Gate Bridge; under wires, Spandex, padding, belts, hooks, zippers, and maybe even nuclear fusion. I swear these swimsuits had to be developed in a linear accelerator. Honestly, they hid or strapped down every little bump or bulge so effectively, swimming was definitely not an option. But damned if I didn’t have cleavage for the first time in my life. True, it was in the back, my ambitious butt crack debuting itself as a result of my south end cheeks being packed into the bottoms like Spam in a can, but hey, I’ll take it.

I finally found two unrelated swimsuit pieces, took out a second mortgage out on my house, and bought them.

As I drove home I passed a Target, and thought to myself at what point did I go from rocking a cheap swimsuit to having to pass off a high-tech, costly girdle as “Activewear”? Okay, I admit I still look okay in the right clothes, but the body underneath has grown to be a bit robust and jiggly. What the heck happened to my body, and where was I when it happened? I decided then and there that my new comely figure was just my voluptuous personality bursting forth to bring my physical appearance up to speed.

I smiled at that thought and suddenly was at peace with that expensive contraption I called my new swimsuit.

Ah yes. Middle-aged delusion is such a comforting friend.